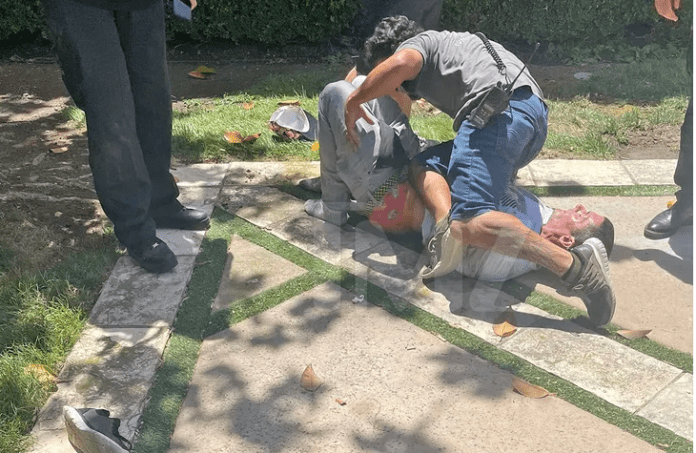 7:05 PM PT — TMZ has learned Jason’s been booked for trespassing, vandalism, and 2 batteries … related to his physical altercations with Britney’s security. We’re told he also has a felony warrant for larceny in another county, and he remains in custody.

Rosengart tells us Britney is safe and adds … “I am personally working with the sheriff’s department to ensure Mr. Alexander is aggressively prosecuted to the fullest extent of the law.”

Britney Spears’ wedding was just dramatically interrupted, as her first husband, Jason Alexander, showed up trying to crash the event … resulting in a police response.

Jason went live on Instagram Thursday as he approached event security — telling him Britney had invited him — and that she was his first and only wife, and he was going to crash the event before some kind of physical struggle. Alexander’s phone then freezes up.

Somehow, Alexander was able to make it inside Britney’s home, where he continued to live stream. He was eventually restrained outside.

We’re told the Ventura County Sheriff’s Department responded to a trespassing call and is still on the scene.

Alexander showed public support for Britney during the #FreeBritney movement — he attended a rally outside an L.A. courthouse back in August 2020 and told our cameras he and Britney had recently been in communication.

Britney and Jason got married in January 2004 in a spur-of-the-moment ceremony in Vegas … and called it quits just 55 hours later.

TMZ broke the story — Britney and Sam Asghari are set to tie the knot in an L.A. ceremony Thursday.