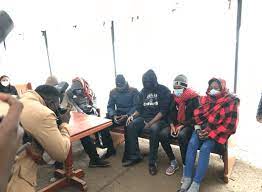 The Independent Police Oversight Authority (IPOA) and the Director of Public Prosecutions (DPP) have now stated that exhuming the bodies of the Kianjokoma brothers will cause untold anguish to their family.

According to the two IPOA & the DPP, the family is already dealing with the untold pain of losing two children who had been arrested in Embu, only to be discovered dead, days later.

The two investigating bodies were filing their responses in an urgent court matter in which, six police officers facing murder charges applied to have the bodies exhumed for an autopsy.

The six, through their lawyers, requested a new autopsy, arguing that the ‘blunt force trauma’ cause of death determined in the earlier autopsies could have been the result of falling out of a moving vehicle.

According to the petitioners, the two brothers, Benson Njiru, 22, and Emmanuel Mutura, 19, died after jumping out of a moving police van.

According to court papers filed in court, the investigating officer claims that he interviewed & recorded statements regarding the incident that led to the deaths of the two.

The officer said the two had been assaulted by the six officers during their arrests.

“It was clear from the witness statements that the deceased persons had been assaulted by the petitioners during their arrest, “reads the affidavit

In an affidavit, Ibrahim Abukur Shunu, the senior investigation officer with IPOA, claims that the allegation that the circumstances of the case can only be determined through a public inquest is misleading & without foundation because the DPP has sole authority to initiate criminal proceedings.

According to the officer, investigations revealed that on August 1st, around 10.30 p.m., the two brothers were at Kiajakoma Trading Centre on their way home with their friends when one of the brothers spotted a police vehicle parked around a corner.

He claims that when the friends of the deceased saw a police officer dressed in civilian clothes & armed with a long stick on patrol approaching the direction they were in, they alerted their friends & decided to run back in the direction they had come from in order to avoid arrest for violating curfew orders.

Balenciaga Is Selling Destroyed Sneakers for $1,850

First thing's first, no, the image you see at the top of this page is not what Balenciaga's new Paris sneaker actually looks like. Rather,...
Read more
Load more