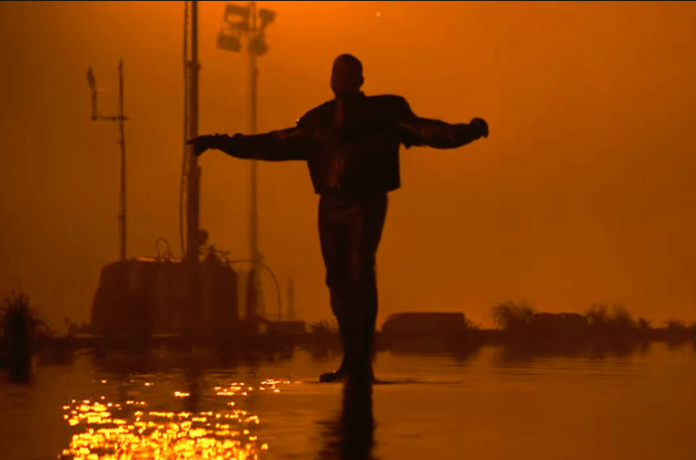 Ye debuted his 11th studio album, the sequel to last year’s DONDA, with an epic performance at LoanDepot Park on 2-22-22, which was live-streamed on YouTube and in IMAX theaters, and featured appearances from Alicia Keys, Jack Harlow, The Game, Migos, and more.

Ye once again erected a replica of his childhood Chicago home in the stadium, engulfed in flames and surrounded by water. XXXTentacion’s vocals could be heard blaring through the speakers for the opener “True Love,” which finds Ye rapping about being separated from his kids.

Divorce was a recurring theme on the album, including on the song “Security,” with the lyrics, “Never stand between a man and his kids / Y’all ain’t got enough security for this.”

Throughout the 90-minute spectacle, which was plagued by sound issues, Ye brought out special guests including The Game, who performed “Eazy.” Pusha T waded through the water with Ye for “Diet Coke,” while Migos debuted their new collaboration “We Did It Kid,” which also features Baby Keem.

Jack Harlow joined his “hero” live for “Louis Bags,” while Soulja Boy and Ye squashed their beef and reunited on “First Time.”

Other featured guests on DONDA 2 include Travis Scott (“Pablo”), Don Toliver (“Broken Road”), and the album’s executive producer, Future, who appears twice on “Pablo” and “Do I Look Happy?”

After debuting new music, Ye performed tracks off the original DONDA including “Jail Pt 2,” with appearances from Marilyn Manson and DaBaby. According to Rolling Stone, the appearance of the shock rocker—who’s been accused of sexual assault—drew “noticeable groans” from the audience.

On the opening of “Sci-Fi,” Ye sampled Kim Kardashian’s “SNL” monologue, during which she praised the father of her kids as the “best rapper of all time.”

Alicia Keys delivered the chilling opening notes of “City of Gods” before being joined by Fivio Foreign. The evening closed out with “Off the Grid” featuring a raging Playboi Carti, donning face makeup, followed by an explosion that echoed throughout the stadium.

DONDA 2 will be released exclusively via Ye’s Stem Player, which can be purchased for $200 and allows users to customize any song.