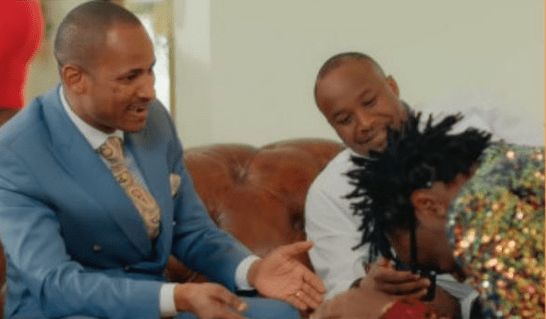 Bahati is one of the very few Kenyan musicians that have mastered the art of keeping the people talking, which is a very important part of staying relevant in showbiz.

Be it positive or negative, Bahati seemingly still believes in the age-old adage that ‘all publicity is good publicity.’

From collaborating with Gengetone artists, smoking cigar in a music video, opening and closing and reopening his record label, fighting signees in court, to eventually ditching Gospel for the Secular world, not forgetting outrageous gifting stunts with his wife on her YouTube channel – every time we think we have seen it all from Bahati, he pulls something else right out of his hat.

He has, yet again, done just that, with his latest music release.

For starters, Bahati went to seek a collabo in the most unusual of places; Luo Ohangla music. His search landed him right at the feet of Prince Indah, who is arguably the biggest musician of the genre at the moment, depending on which Luo you ask.

Prince Indah has continuously belted out hits that have kept the Ohangla/Benga nation on their feet, with some of them even making it to TikTok trends such as his ‘Chike Hera’ smash where he sings the now popular “Anayekupenda pendana naye / Asiyekupenda wachana naye” lyrics.

Hence, for Bahati to think outside the box and rope him into the song was one of the boldest moves he has made in his career.

And then, for the video, Bahati went and collected some of the biggest names in the showbiz industry today, and also brought on board two well-known youthful politicians.

As to how good or bad the song is, we’ll leave that to you, the fans, to be the jury.